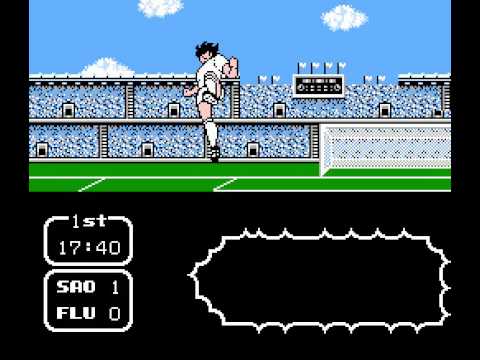 Captain Tsubasa 2 is a mix between a turn-based action RPG and a sports simulator. There are various stats for each character, special moves, character levels, criticals, etc. The story follows events of the original manga/anime Captain Tsubasa a.k.a. Flash Kicker. The series is characterized by dynamic football moves, often stylish and implausible. The plot focuses on Tsubasa’s relationship with his friends, rivalry with his opponents, training, competition, and the action and outcome of each football match.

The game features a wide variety of high-quality close-up animations and story-related cutscenes, which make the game feel cinematic. The sound is great, too.

Now about the bad things…
The AI is cheating. Even though it sometimes seems to fail to counter your moves, it always reads your input. It just sometimes allows you to have a chance. Some enemy star players move at double or even triple speed. Stats of your enemies grow progressively quicker and go into 3-digit values in the last tournament while your stats never go near 80 without grinding. It is possible to grind for levels by losing a match, but that means you get thrown back into a previous match (unless you lose in the first match of a tournament). Every time an enemy player performs an action while in possession of the ball the game automatically switches your control to another player, which, coupled with the fact that your teammates’ AI rarely does anything smarter than running in one direction like a herd of dumb cattle, makes playing defensively way harder than it should be. Enemy AI, of course, doesn’t have this problem and has its players positioned strategically across the field, forming a huge “no grind, no ball” blob half the size of the field. Enemy defenders seem to be able to teleport from the other half of the field to kick the ball out of their net. The most infuriating thing of all is the fact that enemies have unlimited Guts, so they can spam shots and special moves endlessly.

I try to play so that all special moves, all animations and all lines are shown but I don’t manage to show everything. Some things I missed are shown during credits (e.g. ball explosion, which can be caused by a powerful special shot). I lose once (at the beginning of the second tournament) to show losing messages, as well as to show all the quotes of that match. I don’t grind until the friendly match versus Uruguay but rather rely on passing the ball around to bypass enemy players, and on luck, but mostly luck. After that, things got ugly. I skip grinding and only show how stats of key players have changed.